The so called Percorso culturale is a small route,

equipped with facilities, such as information boards,

that mention some historical events, that happened around Becetto.

Once this route was used every year, the eighth of September,

for a religious procession in  honour of the Madonna,

in which the inhabitants carried a black effigy of the virgin along this route. 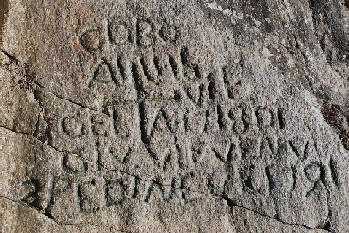 Along the route you will find the testimony

of an extraordinary  historical happening in 1791.

There is a rock in which is engraved

Translated this means that at the 16th of June,

the temperature fell under zero degrees what led

The snow remained two feet high after that.

One of the information boards is dedicated to the extraction of minerals,

especially iron ore, that characterized the valley for some centuries.

In the middle of the 6th Century the minerals of Varaita valley provenance,

where, carried on the shoulders of mules, brought  to the smelting works

Therefore they had to overstep the passes  “Colle del prete” and “Colle di Gilba”.

The mine of Crosa was run until 1740 by the Ricatti di Manta family,

that had the smelting works monopoly of the Varaita, Maira and Po valleys.