Around the year 1200 the bishop

of Turin had a big influence

on most of the feudal lords.

For example the lords of Verzuolo,

which had some property around

Becetto up to the pass” Colle del Prete”.

The constitution of the parish S. Maria

had been asked by the inhabitants

of Becetto, because the population

and at the same time it was a big effort

to go down to Sampeyre every time. 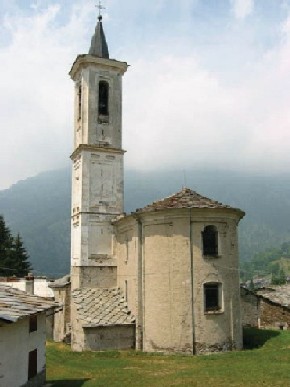 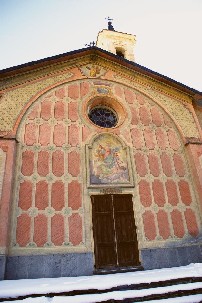 Actually this demand was also useful

in which the marquis of Saluzzo  were getting more and more

influence on the valley floor.

Since its building, the church of Becetto, that was under

the authority of the abbey Rivalta, was a centre of  big devotions.

The pilgrims made a long way to arrive there.

We know for example that there was a pilgrimage

from Vercelli to Becetto in the year 1219.

During  the war for the succession of the Austrian throne,

Becetto was an important point in the defensive lines

against a French invasion.

A memorial tablet walled-up in the ancient priorate

of the church still remembers this event. 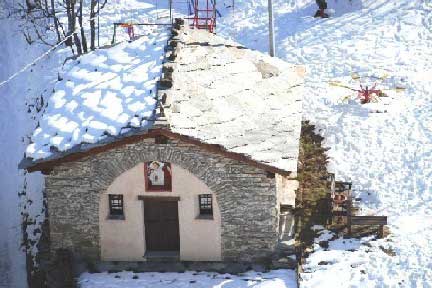 The origins of this chapel, restored by the hands of voluntary workers,

are not surely known.

During the last years it was mostly used as a storehouse.

Surely it was not constructed as a farming building.

Probably it was the mortuary chapel of the ancient cemetery,

which is neighbouring, but it could also be the predecessor of the Sanctuary. 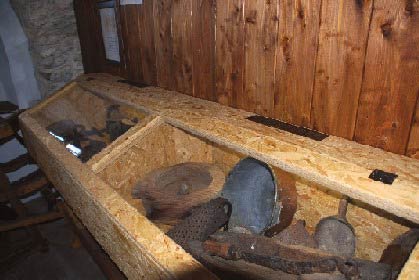 By the inhabitants of  Becetto it is called the Saint Bernard´s chapel.

It is mentioned by M. Perotti in his book "Repertorio dei monumenti artistici

who makes the following description of it:

“This construction describes the work of Romanesque carpenters,

but it is nearly completely abandoned. Certainly it is older then the sanctuary,

and it is a very interesting object for studying the architectonical solutions and wall structures.

On the inside there are no signs of wall paintings or sculptures.”

After the reconstruction we decided to put a little museum in it,

even if there is not much space.

At the centre of the room you will find the old mechanic clockwork,

that counted the ours for everyone until the 1970´s.

Like this the chapel can continue to be a testimony of the time that passes. 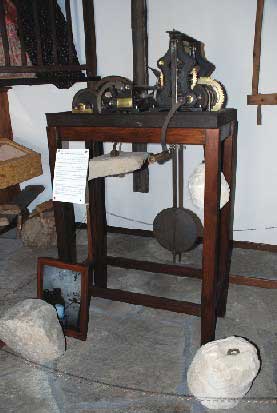 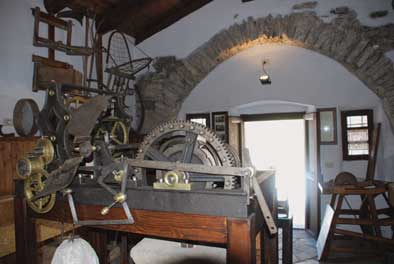